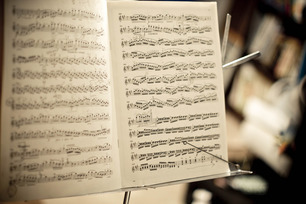 How to learn a new piece of music

Learning a new piece of music is one of the hardest skills to master as a musician. Going from nothing to a stellar performance takes a lot of practice, understanding, and thought. There is nothing wrong with a challenging piece taking days or even weeks to learn; it all depends on your current skill level and the difficulty of the music at hand. However, there are several methods of approach and practice than can significantly cut down the time it takes to learn and memorize music.

The first and most important method is to actually find a recording and listen to it. Listen to it many times, preferably until you have memorized the recording. Most musicians don’t do this, yet it is incredibly valuable. Hearing professionals gives your brain a ton of information whether you realize it consciously or not. Your brain will absorb the tempo, style choices such as dynamics, tone production (especially important for horn players), it will get accustomed to hearing good rhythm, and it will make the process of eventually playing from memory much faster. The more you listen to music with this kind of focus, the more these skills compound. It increases a lot of skills exponentially.

After listening, there is a much better way to read the music for the first time besides winging it. Look over the whole thing without playing. Try to sing the melody, or at least the rhythm to yourself and hear it in your mind. Notice places that might be difficult, such as large leaps, faster rhythms, and unusual notations (such as an Fb, which is actually just the note “E”). Pay attention to key changes, tempo changes, etc. Now you have a general picture of the piece.

As I’ve written in previous articles, it’s crucial to avoid mistakes. That means playing very, very slowly at first. It’s more than okay to be patient with yourself in order to avoid putting mistakes in your muscle memory. And on the topic of playing slowly, it’s also a great move to actually set a metronome at a slow tempo. The quicker you can start playing the piece in time, the faster you will be able to play it in time at the proper tempo. Allowing yourself to pause and slow down at every difficult section will ultimately hinder your progress compared to playing it all at one consistent tempo.

After getting a decent grasp on how to play it, try analyzing the music from a theoretical perspective. Understanding the basic chord progression and scale or scales the composer is using, certain notes will automatically enter your mind as notes to avoid. For instance, most early piano pieces avoid all black keys, so once you are advanced and can recognize “this piece is in C major”, you will know to avoid black keys and this will prevent you from accidentally playing them. Conversely, you may recognize a piece in a key such as F# major and think “there are actually only a couple white keys, mostly I will be playing black keys”.

Understanding the theory behind a piece also helps bring out certain elements of style and phrasing in your performance. For example, noticing that a key change occurs, or that the song enters a minor key after starting in a major key will help you enhance those distinctions in your playing, and make the experience more moving for the audience. New sections should be accompanied by a change in texture, dynamics, articulation, etc. If you can identify what is happening on the theory side of things, that will inform your stylistic choices.

Overall, it is highly beneficial to learn as much about a piece as possible away from the instrument. Gaining an understanding of theory, observing ahead of time the difficult sections, and having an idea of how it sounds first will help you avoid putting mistakes in your muscle memory and memorize the music faster. After consistently applying these techniques for years, I am able to learn most mid-level pieces, such as jazz standards, in an hour or less, where it used to take me a week or more.